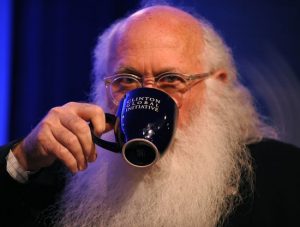 This a photo of Howard-Yana Shapiro, Global Staff Officer of Mars Inc, during the annual Clinton Global Initiative (CGI) September 22, 2010 in New York .

Howard-Yana Shapiro’s the name and sustainable development for the world’s cocoa farmers is the game.

I wonder what’s in that mug.

More from the Wiki article (that Howard also wrote) …

The first chocolate beverage is believed to have been created by the Mayan peoples around 2,000 years ago, and a cocoa beverage was an essential part of Aztec culture by 1400 AD. The beverage became popular in Europe after being introduced from Mexico in the New World, and has undergone multiple changes since then. Until the 19th century, hot chocolate was even used medicinally to treat ailments such as stomach diseases. Today, hot chocolate is consumed throughout the world and comes in multiple variations including the very thick cioccolata densa served in Italy, and the thinner hot cocoa that is typically consumed in the United States.

Today, hot chocolate in the form of drinking chocolate or cocoa is considered a comfort food and is widely consumed in many parts of the world.