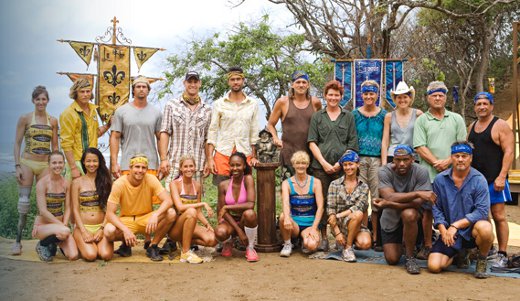 Above is the cast from last night’s premier of “Survivor: Nicaragua”, the reality TV show credited with sparking a nauseating, yet addictive, reality-television revolution in the U.S.

After pitting teams in the previous 20 seasons based on such tasteless gimmicks as gender and even race, this season features the “Battle of the Ages” with 10 “aged” competitors over age 40 versus 10 youthful adults under age 30.

Is this just more harmless reality-TV trash, or should we be worried that this piece of pop culture reflects broader symptoms of intergenerational tension in our society?

Here’s one of the heavily laden metaphors they use in the intro to foreshadow the intergenerational bombshell:

Nicaragua, where…  “ancient rainforests battle for survival against some of the world’s youngest volcanoes.”

And in the promo, The New York Times excellent blog “The New Old Age” reports, reports:

Marty, a graying executive, warns, “There’s a lot more attributes that favor us than they do the young and disoriented punks.” Whereupon — amid the usual portentous soundtrack and shots of contestants in bikinis — one of the supposed punks, a student named Jud, declares, “There’s no reason we can’t just mow ‘em all down.” Marty, the cast bios disclose, is 48; Jud is 21.

Our society, she said, “is not a competition. It’s a community.”

Before I offer commentary I have to admit that not only do I not own a TV, but I ditched television about four years ago due in no small part to the aforementioned “reality-television revolution” sparked by Survivor. Now, I’m not a snob, and I watch plenty of TV on the internt (I’m watching/listening to Episode 1 of Survivor:Nicaragua streaming on CBS.com as I type this). But I’m not sure I could have a worse opinion of reality TV.

I’ll be monitoring this season of Survivor to see how egregiously it tests the boundaries decency and ageism. Also, like “The New Old Age” blog, I’ll be looking to see what it says about the current state of intergenerational conflict in our politics and culture:

…Generational conflicts do seem to be surfacing in Washington and in statehouses, where legislators and lobbyists often wrap budget-cutting and anti-deficit arguments in language about children and grandchildren. The contention that the United States can’t afford quality education for the young, support for the old and health care for both no longer lies outside the mainstream.

Anybody else catch the premiere last night? Don’t be embarrassed if you’re a Survivor or reality TV fan — TV ratings say the majority of us are. I’d love to know what Dr. Bill thinks, as well as our “Generations” correspondent, Virgil Thomas. How would you guys feel facing off against each other in Survivor: Battle of the Ages!