You are here: Home / Archives / Dye Your Hair Gray?

Last week we took a look at people who dare to go gray, this week it’s a Malaysian politician who denies that he dyed his hair gray in order to win votes. 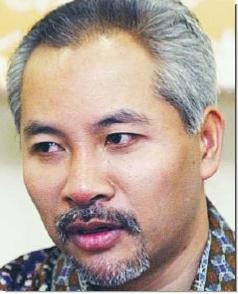 The chief minister of the state of Selangor, Mohamad Khir Toyo, rejected allegations that he had coloured his hair grey to give himself a wiser air. In the West, politicians have been known to dye their hair – or even go under the knife to make themselves look younger.

But Malaysian attitudes to age are rather different. All the major parties have youth wings for members under 40 and last year the Head of the Association of Malaysian Youth Clubs recommended raising their membership age limit to 50.

So at the age of 38 Mr Khir is a mere stripling by the standards of Malaysian politics.

However he denied that he had dyed his hair grey and started speaking in low, coarse tones to reach out to older voters in rural areas.

Instead, the youthful chief minister blamed his grey hair on the stress of his job – and his gravelly voice on giving too many speeches.

His opponents have said – rather unkindly – that it would take more than grey hair to make Mr Khir appear wise.