You are here: Home / Archives / Drinking from the Facebook Hydrant

When it comes to Facebook I try to take a Zen approach and not get too worked up over the latest privacy infringing upgrade or the ridiculously clunky new photo viewer.

My latest frustration stems from trying to fathom Facebook’s unfathomable algorithm for filtering my friend’s activity in the main news feed. John Flurry of the johnflurryblog recently pointed out that what people see in their news feed is not a complete picture of their friend’s updates and activity. Far from it. Since the last major overhaul of the popular social networking site, Facebook has taken control of who’s updates you see and they’ve drastically cut back those updates.

Facebook’s point of view is that they want to reduce information overload as their membership soars past 600 million worldwide. From the users point of view, it’s yet another example of Facebook’s autocratic mentality.

Nobody knows exactly how Facebook filters your news feed, but based on observation it appears Facebook started restricting updates to only those friends you interacted with the most in the months leading up to the last major upgrade.

If, like me, you don’t want Facebook to control which friends you stay in touch with, there’s an easy fix to return all of your friends to your news feed. On the main news feed click on “Most Recent”, then open the drop down menu and click “Edit Options”, shown below:

From the top dropdown box “Show posts from” select “All of your friends and pages” and click save: 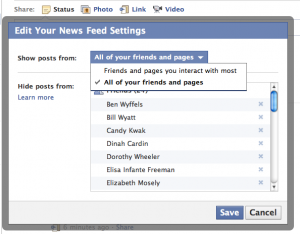 That’s it, you’ve successfully thumbed your nose at the rulers of what would be the third largest nation in the world.  If you’d like to setup your own filters for the news feed, johnflurryblog has instructions for creating and bookmarking friend lists. DailyBeast has an interesting report exploring Facebook’s news feed algorithm here.