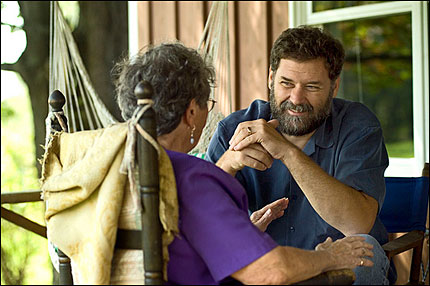 Tune-in to NPR’s Talk of the Nation with Neal Conan this Thursday, April 2, to hear Bill Thomas interviewed in the first of a new series on “What Works.”

Dr. Bill Thomas graduated from medical school passionate about emergency medicine. He was a “real” doctor, working long hours in an exciting ER packed with the promise of blood, guts and glory. One night the phone woke him up from a deep sleep. He said, “hello,” and the man on the other end asked him if he’d ever thought about being a doctor in a nursing home. Thomas scoffed and hung up, but when the man called back, after another punishing ER shift, Thomas agreed to check out the retirement facility. He took the job to offset a night in the ER, and bustled about, speaking loudly to his elderly charges. One day, when he visited a resident with a rash on her arm, the woman pulled him close to her. As he tells it, he looked into her beautiful light blue eyes, and she said one thing to him.

Thomas bustled out of the room, wrote her a prescription, and tried to move on, but her words haunted him.
Ever since then, Dr. Thomas has worked tirelessly on behalf of the elderly. He developed the Eden Alternative, an initiative that worked to bring plants, pets and children into formerly cold, institutional nursing homes.
His more recent effort is the Green House Project. NPR’s Joseph Shapiro took a look at the effort early on.

It’s based on a simple idea: Older people will thrive in a nursing home if it’s built to resemble living in one’s own house. Others have tried to make existing nursing homes more homelike. The Green House Project makes the nursing home over from scratch, the goal being to give residents more privacy and more control over their lives.

Nearly four years after Shapiro’s visit to the first Green House community in Tupelo, Miss., Thomas’s project appears to be a success. It has partnered with the Robert Wood Johnson Foundation to support a broad and inclusive Small House Networking Initiative across the country. The Foundation calls the Green House model “what the future of elder care should be.” And a longitudinal study conducted by Dr. Rosalie A. Kane from the University of Minnesota found statistically significant improvements in the quality of life at Green House Projects.

We’ll be speaking with Dr. Thomas on Thursday, April 2 as the first entrant in our “What Works” series. He had a simple idea for fixing a problem, and indications are that it works. What are your experiences trying to solve the problems found in typical nursing and retirement homes? How have you handled issues like staff turnover, resident happiness, and the satisfaction of the residents’ families?
–Blogged by Sarah Handel, Talk of the Nation