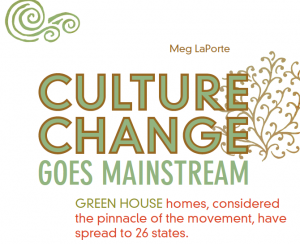 BREAKING NEWS — One of the remarkable outtakes from Provider Magazine’s May cover story “Culture Change Goes Main Stream,” is the dramatic increase of awareness of the culture change movement in recent years.

In 2005, nearly three-quarters of health care opinion leaders surveyed by the Commonwealth Fund were unfamiliar with the concept of “culture change,” despite nearly 20 years of advocacy within the movement.

But just three years later in 2008, 66 percent of respondents reported they were familiar with the culture change movement — a dramatic turnaround.

…culture change has become a part of the long term care lexicon. The basic tenets of the movement—person-centered care, individualized treatment plans, and resident choice and autonomy—have become the standard by which quality care is measured.