You are here: Home / Archives / AARP Gets Social

One of America’s largest and most influential membership organizations is trying to get a little more socially networked — online, that is.

AARP, which claims more than 40 million members nationwide, announced this week that it has overhauled its website in an attempt to “keep up with the changing needs of the 50+ generation, focusing more on social networking.” The announcement included results from a recen survey by AARP that found more than a quarter (27 percent) of Americans age 50+ use social media websites. The survey also found:

The interesting part to me is that AARP is going beyond building a presence on Facebook and Twitter and has ambitiously launched it’s own social networking platform — the AARP Online Community, which already boasts 276,000 members.

Normally, I’d advise against trying to reinvent the social networking wheel when a juggernaut like Facebook is pushing 500 million users. And previous forays into “age-specific” social networking, such as Eons.com and the now defunct Boomj and Boomertown, don’t inspire much confidence.

But AARP is a behemoth of sorts itself with a powerful brand and lobby to boot. I probably don’t need to explain their clout to this audience, but just in case here’s their Wikipedia page.

So I went ahead and took a look at their product. I like that AARP has opened it’s Online Community to people of all ages (I assume that’s the policy, as they allowed a youthful 32-year-old such as myself to create an account — signup here). When you join you get a profile similar to Facebook or LinkedIn and are able to connect with “Friends” and join or create “Groups”. You get your own blog and email, but there’s no chat function that I can see. Here’s what the profile page looks like: 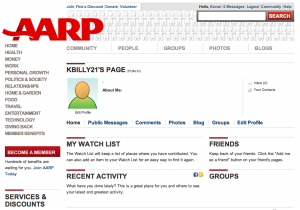 Not the most appealing or intuitive layout, even compared to LinkedIn’s frenetic look and Facebook’s ever-changing kaleidoscope of features and settings. But I will import some contacts and stick around to see how it shapes up. Let us know if you think it’s worth your time to join AARP’s Online Community, and feel free to friend me at Kbilly21.

[Full Disclosure: Dr. Bill has been a Visiting Scholar at AARP, but the organization has no affiliation with ChangingAging.org]