You are here: Home / Archives / A Wise Soul Passes

Ellen Stewart, the founder, artistic director and de facto producer of La MaMa Experimental Theater Club, a multicultural hive of avant-garde drama and performance art in New York for almost half a century, died Thursday in Manhattan. She was 91. 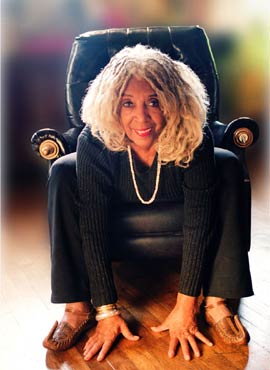 In 1950 Stewart moved to New York City, where she worked as a trimmer in the brassiere-and-corset department at Saks Fifth Avenue and, later as a dress designer, under the direction of Edith Lances, head of the department store’s custom-corset department.[7][5] Stewart continued to work as a fashion designer throughout the 1960s and 1970s, notably for a manufacturer called Victor Bijou, where she designed “sport dresses and beach wraps”.[6]
In 1961 Stewart founded Café La MaMa, which became one of the most successful Off-Off-Broadway theatrical companies – La MaMa Experimental Theatre Club.[8] In the next decades she became famous around the world, writing and directing an enormous body of pieces, exclusively based on music and dance, with international artists.
In 2007 Stewart was awarded the Praemium Imperiale in the field of Film and Theater.[7][8]
In 2005 Tom O’Horgan presented Stewart with the Stewardship Award from the New York Innovative Theatre Awards. This honor was bestowed to Stewart on behalf off her peers and fellow artists of the Off-Off-Broadway community “in recognition of her significant contributions to the Off-Off-Broadway community through service, support and leadership.”

In her own words…

“I never had self-doubt. I was always taught by my mama that I’m on an island and there’s not a soul on the island but me. And so whatever gets done, I have to do it. That’s the way I was brought up. So I never thought about self-doubt. But anything that I’ve wanted to do, I always believed that somehow – I believe in the somehow – that I could find a way to do it.”

More in the Wiki