You are here: Home / Aging Literacy / New Longevity Book Has Some Surprises 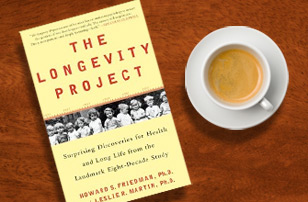 Patrick Kiger at the SecondAct blog has this excellent review Howard S. Friedman’s and Leslie R. Martin’s new book, The Longevity Project: Surprising Discoveries for Health and Long Life from the Landmark Eight-Decade Study, which is rocking preconceived notions of what it takes to age well. After analyzing data from the longest longitudinal study ever conducted following children who grew up in California in the 1920s, Friedman and Martin found that qualities such as pessimism and workaholism may actually contribute to longevity:

Friedman and Martin concluded that many of the commonly accepted keys to a long life — such as avoiding overwork and having a sunny outlook — weren’t as beneficial as they seemed, and in some people may have actually had a negative effect. They found, for example, that habitual optimists often neglected to follow doctors’ advice or avoid risks, to the detriment of their health and safety. Comparative downbeat, neurotic people who paid attention to those details fared better. And sociable, outgoing individuals, they discovered, actually were more likely to smoke, drink and engage in risky behaviors, in part because they more often found themselves in settings where those behaviors were the “thing to do.” Less extroverted, more nose-to-the-grindstone subjects, in contrast, tended to avoid those health hazards.

Friedman and Martin write that the best key predictor of longevity turns out to be conscientiousness — “the qualities of a prudent, persistent, well-organized person, like a scientist…somewhat obsessive and not at all carefree.” One example is Patricia, a young girl from San Francisco who told Terman that she enjoyed planning her work in detail and driving herself steadily to achieve goals. She was nonimpulsive but persistent. Patricia not only went on to do well in college, but lived into her nineties.

Patrick rightly notes that the researchers’ findings should be taken with some caveats. The findings from such a small group of individuals, although exhaustive, may not necessarily apply to the population as a whole. Read the full review for more great details.