In a recent conversation, my good friend Noah brought up the tendency of industrialised capitalist cultures to isolate age groups, which eventually leads to each age group othering (or, perceiving as ‘other’) anyone born before or after them. When younger people inevitably become the older outsiders, it is common to begin neglecting the ritual of celebrating their births. Only some hold on to the tradition after their peers stop, and even fewer folks actually publicly profess their age in these instances. Milestone birthday parties seem to only be granted to those who have the social agency to afford to reveal their age.

In the white, middle-class, capitalist culture in which I was raised, there was no greater ritual than that of the birthday party. With the necessary bare minimum of cake, candles, wrapped presents, and a swarm of kids around the same age as the celebrant, there were endless possibilities as to what could be added to the ceremony. There were competitive games like pin the tail on the donkey or musical chairs, with any number of themes and venues. It was an annual event which also reinforced the celebration of the individual; the addictive edge of consumerism and the segregation of younger people based on the year they were born.

For someone like me, who prefers to explore the world from a pro-ageing perspective, this last month has been unusually sensational. The White House declined to censure Homeland Security Secretary Kelly Sadler when she said that whatever Senator John McCain’s opinion, it did not matter because he was ‘dying.’ Then, in New York City, billboard advertisements from a delivery service declared 30-year-olds “as good as dead.” Postmates reminded those ‘adulting’ New Yorkers with a credit card and a smartphone that they no longer had to share cake with the other kids: “When you want a whole cake to yourself because you’re turning 30, which is basically 50, which is basically dead.” 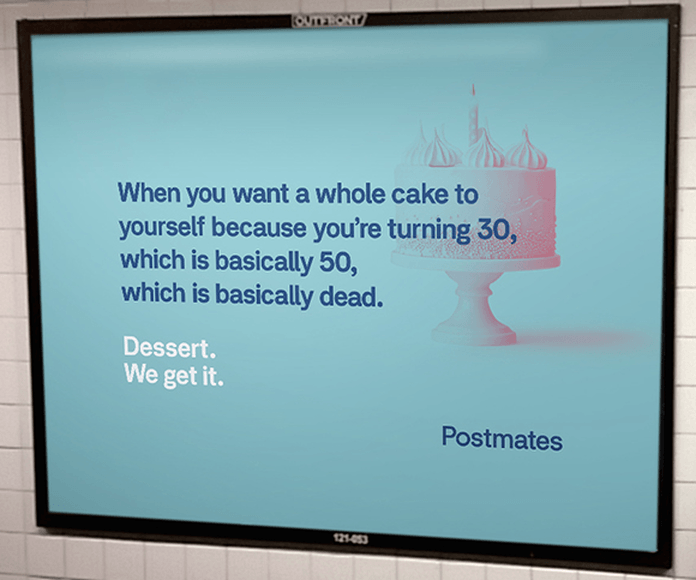 Opposition from anti-ageism activists effectively challenged the billion dollar company online, and the billboards were removed. Besides being born in 1988, this ad hit a nerve for me because of the large amount of intense manual and emotional labor I have done working for this company throughout my twenties. I would go so far as to say I have, on many occasions, put my life on the line while working for this company, and I know this is also true for many others. Simply put, their advertisements, in my experience, are consistent with their business model: making money is more valuable than human life. The conflation of these messages –that the opinions of those old, dying or over thirty don’t matter– is a reproduction of the baby boomer’s motto from their youth: “don’t trust anyone over thirty”. Even though apparently Jack Weinberg never meant for this statement he said to be quoted in a 1964 article, it is without a doubt a mainstream catchphrase of that generation.

It is also my experience, though, that age-pride is a much more attractive and powerful force than age-shame, even though it is not as popular as of yet. That is luckily changing, though. Pop star Pink tweeted a pro-ageing proclamation last month in response to a troll who made a “Pink looks so old” joke. After calling the troll out, she tweeted: “I am of the mindset that it’s a blessing to grow old. That if your face has lines around your eyes and mouth it means you’ve laughed a lot. I pray I look older in 10 years, cause that will mean I’m alive.” So far, the tweet has gotten 15K retweets and 99K likes. It is a powerful message, and one people obviously need to hear right now. Boiled down, it is this: aging is good. It may not seem like such a radical concept, until one considers the fact that the global anti-aging industry is worth hundreds of billions of dollars. 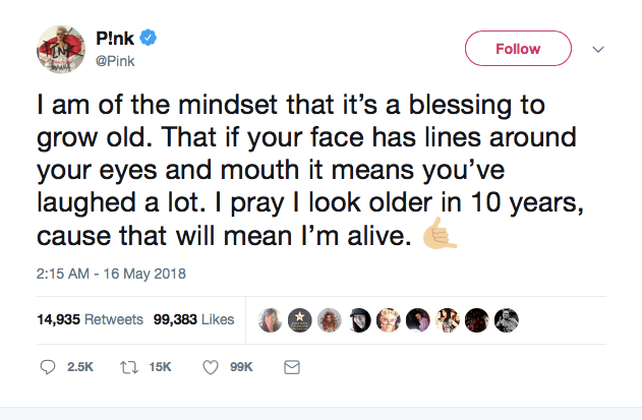 Ageism is difficult to see precisely because it is so pervasive. Kelly Sadler and the administration, those advertisements, and Pink’s troll, are all backed up by many subtler and often hidden ageist beliefs and attitudes. If you don’t believe me, greeting cards are proof enough: systemic youth supremacist culture is rife in birthday messages arranged on racks in stores everywhere. The mystifying truth is, “aging is good” is exactly what those birthday parties I experienced as a child attempted to promote. Perhaps these rituals were so over the top because ageism had such a firm grip on the organizers, the parents: enjoy aging while you still can, before it turns on you! This ends up creating the ageist presumption that young people must accomplish as much as possible while they “still can.” Wouldn’t it be revolutionary if we all kept the attitude of enjoying aging throughout our entire lives, as some of the happiest amongst us already do? 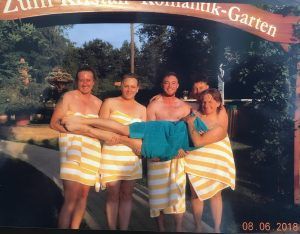 Personally, I have almost altogether abandoned mainstream rituals for more powerful and meaningful ones. On June 8th I spent my birthday at a spa just outside of Berlin where I was given the gift of free entry, two euros towards something from the cafe (I got a euro eis for my partner and one for me) and a photo, which was graced by some of my favourite people who tagged along for the sweats…

Now that I am on this side of thirty I am thrilled to be aging and to continue this work as an anti-ageism activist. I believe that the eradication of ageism is helpful in also eradicating white supremacy, gender bias, ableism, body shaming, homophobia, classism, and other forms of oppression. Age is only one part of our identity, but it intersects with all the other parts of who we are. It is a universal experience, and I believe embracing this truth will help to liberate us all.