You are here: Home / Ageism / From Ageism to Age Pride

Ashton Applewhite stands before a room of dozens of people expecting to hear the same ‘ol spiel. Instead, she poses a question:

“What is every person in this room going to become?”

When no one offers an answer she continues. “Older. The prospect has an awful lot of us scared stiff.”

A renewed focus on ageism—discrimination on the basis of age—marked the 21st annual Pioneer Network conference, which recently took place in Denver. Ashton’s question kicked off an all-day intensive workshop called From Awareness to Advocacy: From Ageism to Age Pride. She was joined by anti-ageism advocates Mel Coppola, Sister Imelda, and Carmen Bowmen.

“We’re planning to launch an initiative in 2019 that has international, national, state and community impact,” said Pioneer Network CEO Penny Cook. “Ageism is one part of our focus to change the lens of aging.” Penny continued that in order to change the culture of caring for our elders, we need to change the way aging is viewed in our society.

More than 700 people attended the conference, a potent mix of newcomers and veterans of the movement. From Awareness to Advocacy: From Ageism to Age Pride was a highlight. “The ageism session was fantastic,” one attendee said. “I learned as much from other participants as I did from the guides. They did a great job at making it interactive.”

Ashton shifted consciousness by first turning the concept of successful aging on its head. Together we explored how damaging it can be to set the measure anywhere other than waking up in the morning for success. When we set markers for success that are not achievable, we create shame and markets for anti-aging products. Recognizing the gifts that aging has to give is paramount. And the first step to being able to do that is dismantling the ageism at the root of the negative perceptions.

“I’m not saying that getting older is easy,” Ashton went on to explain. “We’re all worried about some aspect of it, whether of running out of money, or getting sick, or ending up alone— and those fears are legitimate and real. But it never dawns on most of us that the experience of reaching old age — or middle age, or even aging past youth — can be better or worse depending on the culture in which it takes place.” 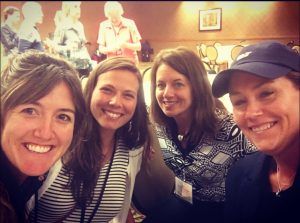 During the intensive, lots of space was given to the wisdom in the room. Each of us had a chance to draw on and share what we have experienced. The personal experiences were varied and awe-inspiring. The eclectic audience included past and present CEOs of the Eden Alternative Chris Perna and Jill Vitale-Aussem, several of Pioneer Network’s founders, elders living in long-term care, long-term care staff, surveyors, ombudsman, academics such as Wendy Lustbader, culture change veterans like Laura Beck, a group of nuns, new blood such as Jenna Dion, continuing care leadership such as Amy Gorley, health care C-suites like Tammy Marshall and more.

In addition to Ashton’s talk about ageism, Carmen Bowmen illuminated the importance of moving from fake to real in long-term care. Sister Imelda and Mel Coppola led the group in spirited discussions. Throughout the day ideas were galvanized into seeds of change to take home.

For decades, there has been a “culture change movement” led by Pioneer Network, ChangingAging, The Eden Alternative, and others. Ageism is at the root of the change we’re all looking for. Ageism is one of, if not the, biggest obstacles to creating a culture which reduces the unnecessary suffering we currently pile on the experience of aging through prejudice.

“It doesn’t make much sense to go through life pretending that something that’s happening to us is never going to happen to us,” Ashton pointed out. “But that’s how most of us act when it comes to getting older. Ageism feeds on that denial: our reluctance to acknowledge that we are aging—all of us, right now. If there’s a lot more road behind you than ahead, you might even be old.”

Awareness about ageism is the first step towards fighting it. But change happens through action, both internal and external. We need to check our own internal biases and work to shift them. (Curious how age biased you are? Take this test created by Harvard’s Project Implicit) We need actionable tools and resources to bring about change in our communities. 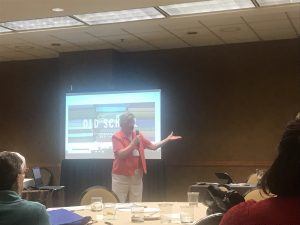 Ashton has long dreamed of a clearinghouse where people can find the resources they need to dismantle ageism. Near the end of the day, she was able to share that this dream had become a reality, OldSchool.info. I was honored to be able to announce the project we have been working on with fellow age activist Ryan Backer.

“Movements need people. (That would be you),” Ashton wrote in her blog post announcing OldSchool.info. “Movements need purpose (To make the world a better place in which to grow old. And, while we’re at it, to be young, or have a disability, or be queer or non-rich or non-white.) And movements need tools.”

In the weeks since the conference, actionable ideas sparked in that room have already taken root. For example, during the workshop, Jill Vitale-Aussem shared a story. That story became a blog post. The blog post inspired Pioneer Network, The Eden Alternative, and LeadingAge to collaborate on a letter that acts as an agent to promote change. I can’t wait to see the stories that come from this initiative. There is a spirit now of coming together around ageism.

“Let’s not be afraid of living as we become olders,” one participant said. “Ashton put this message so simply that we should all show our age pride.  Lived it, earned it – been there done that and now enjoying this. The ‘Age Cooties’ has already become a topic back home here. We have the right to BE ALIVE AND ENJOY so let’s get to it ….. at the same time involve our youth.”

At the end of the day, Penny gave us all a pledge to sign to commit to battling ageism. “This work will only go so far unless we change the perception of aging,” it read. Download your copy here, post it to social media in response to this article, and join the movement against Ageism. 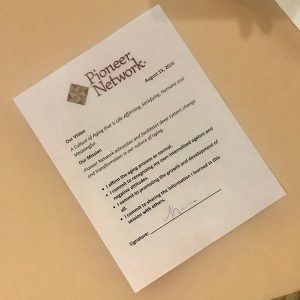